With Popeye Loves Olive at SCHMUCK 2018 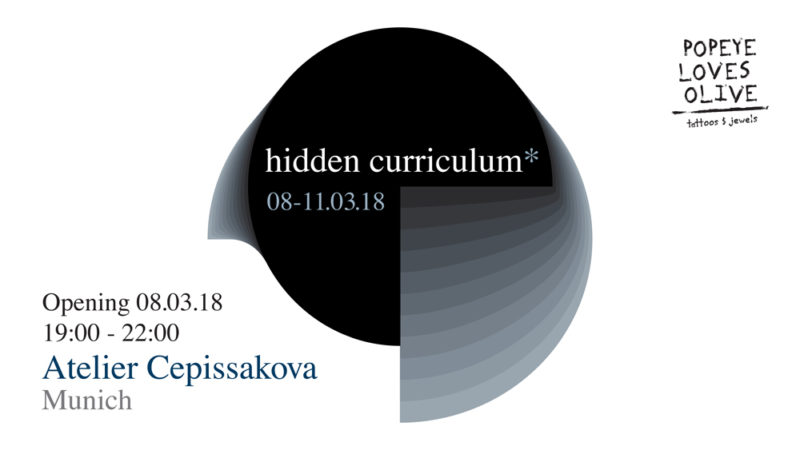 Popeye loves Olive Art Space hosts an exhibition platform during Munich Jewellery Week by inviting a group of 14 Greek artists to meet the Mexican artist Jorge Manilla and to develop a joint project on Hidden Curriculum, Identity and Proxemics.

The Hidden curriculum consists of teaching items which are not officially intended and developed by school and educational system. The educational authorities use the concepts of “hidden curriculum” and “invisible curriculum” to explain teachings and attitudes influenced by these implicit factors (Alavi, Abdollahi and Ahmadi, 2008).

With the intention to explore behaviors, perspectives and attitudes, that the participants pick up during their learning process, in an independent way outside of an institution.

For this exhibition we have decided to take the idea of a Hidden Curriculum and explore in a free but very careful way, issues like gender roles, morals, social class, stereotypes, cultural expectations and personal language.
According to the Austrian artist and architect Hundertwasser, we have five layers of skin. From the innermost to the furthest from the centre: Epidermis, Clothes, Houses, Identity and Earth. Each layer (skin) defines and interacts with the whole human entity.
According to Proxemics, we arrange objects and ourselves in relation to space as it makes us feel more or less comfortable. Individuals naturally maintain a separation that relates to environmental and cultural factors but also to social and interpersonal situations. One could say that proxemics is separated in Intimate, Personal, Social and Public Space/Skins. Moreover, all layers of Space/Skins interact, affect and define each other.

Most importantly, it should be underlined; the above studies claim that Identity is created by social interplay.

According to history, Jewelry serves as a primary means of conveying cultural values. Traditionally, jewels were seen as sacred and precious; however, from the beginning of the 20th century, jewelry has started to be objectified. Jewelry is a product of non-verbal communication as a result of all human social interactions.
The process, through which a piece of jewelry is created, is totally connected with the cultural and social background of each jewelry artist. From the selection of materials to the final product, it is needed that all different possibilities and perspectives of this act to be explored.
On the other hand, the viewer interacts both with the maker and the wearer of a piece of jewelry, as it is sharing stories, feelings and Identities.

This exhibition seeks to collect information on how hidden curriculum, proxemics and identity are expressed by comparing thirteen Greek jewelry artists’ work in opposition to that of a Mexican artist and educator.
What kind of space occupies the work of each artist? What kind of skin it represents?
We thus invite the audience to actively participate by leaving its mark.